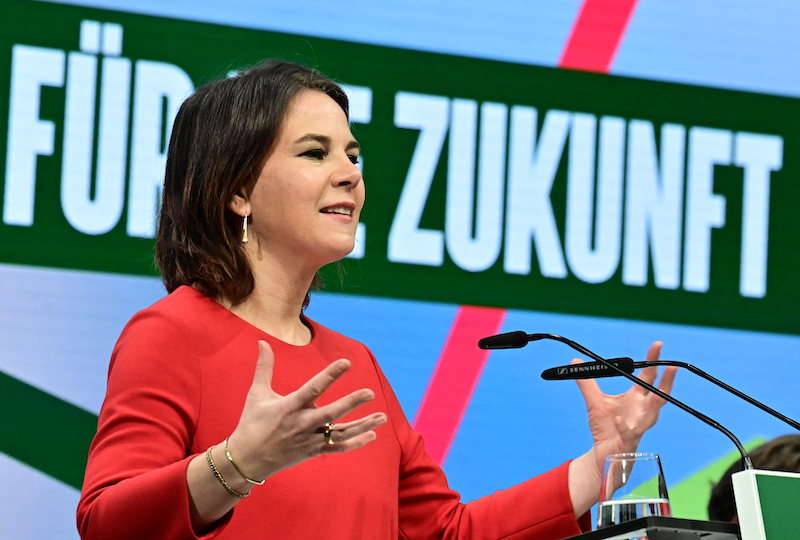 Co-leader of Germany’s Green Party (Die Gruenen) Annalena Baerbock delivers a speech at the party’s meeting with their members in the federal states on the results of the coalition negotiations, in Berlin November 25, 2021. — AFP pic

The 40-year-old mother-of-two is expected to take on the role in early December once the new government — made up of the Social Democrats (SPD), the liberal FDP and the Greens — is formally installed.

Baerbock has signalled a more assertive stance on China and Russia, putting respect for human rights and the rule of law at the centre of German diplomacy.

Green party manager Michael Kellner said in a statement that co-leader Robert Habeck has been tapped to head a “super ministry” grouping together economy, energy and climate protection.

He will also become vice chancellor.

Although Baerbock, a former medal-winning trampolinist, failed in her bid to replace Angela Merkel as chancellor in September’s election, she nevertheless led her party to a record score of 15 per cent.

The third-place result paved the way for the Greens to return to governing after 16 years in the opposition, in a novel three-way coalition with Olaf Scholz from the SPD as the presumed next chancellor.

The three parties — known as the “traffic light” alliance after their party colours — unveiled their coalition agreement on Wednesday, as well as the division of ministerial posts.

The agreement must still be formally endorsed by all three parties, expected to be a formality. Scholz is set to be sworn in by the Bundestag in the week starting December 6.

Five cabinet posts have been allotted to the Greens. Although the appointments of Baerbock and Habeck were widely expected, the party was plunged into a last-minute power struggle over who would fill the remaining three jobs.

In keeping with Scholz’s promise that the next cabinet would have gender parity, only one of those three could go to a man — pitting the party’s radical “Fundi” wing against Baerbock and Habeck’s more pragmatist and centrist “Realos” camp.

The tussle was resolved in evening talks on Thursday, with Kellner announcing that popular lawmaker Cem Ozdemir, who has Turkish roots, would lead the agriculture ministry. Ozdemir hails from the “Realo” camp.

Several other top ministerial picks have also been revealed in recent days, with FDP leader Christian Lindner, a budgetary hawk, poised to become the new finance minister at the helm of the EU’s top economy.

Faced with a fierce fourth wave of coronavirus infections that saw Germany pass the mark of 100,000 Covid deaths on Thursday, they also pledged to create a crisis team to tackle the pandemic.

Outgoing Merkel however signalled she didn’t think current efforts went far enough, saying on Thursday that “every day counts” and quick action was needed to prevent hospitals from being overwhelmed. — AFP