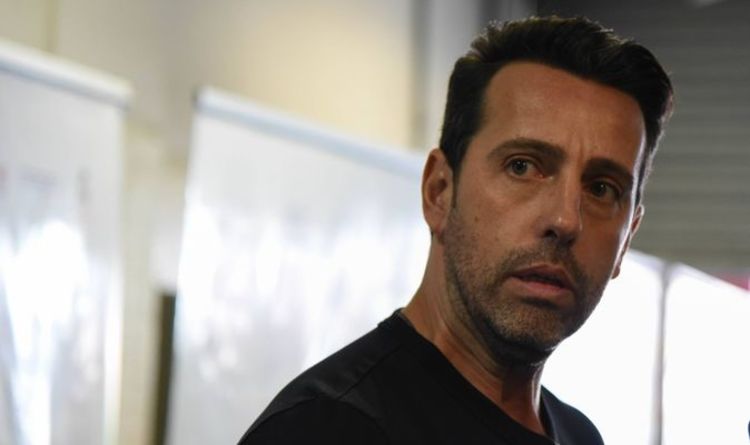 Arsenal director Edu has been tipped to maintain his big-spending habits in the transfer market when January rolls around. The Gunners splashed more than any other Premier League club during the summer window, shelling out in excess of £150million on no less than six new players.

However, it seems as though a mid-season recruitment drive could still be on the cards ahead of the business end of the campaign.

Lille midfielder Renato Sanches has been tipped to join Arsenal after declaring earlier this week that he is looking for a new challenge, while the likes of Club Brugge winger Noa Lang and Real Sociedad marksman Alexander Isak have also been linked with the Gunners as of late.

With that in mind, Express Sport takes a look at the Arsenal side that could soon take shape if Edu manages to land all three players at the turn of the year.

Aaron Ramsdale has tightened his grip on a starting spot in recent weeks after a number of impressive performances between the sticks.

He was beaten on four occasions by Liverpool on Saturday evening but has largely succeeded in shutting out opponents while impressing with his distribution from the very back.

The 23-year-old is likely to keep his place in the side ahead of Bernd Leno for the rest of the season as a result of his strong recent showings.

Takehiro Tomiyasu has gained plenty of admirers since joining the Gunners in a last-gasp deadline-day move over the summer.

He will continue to feature ahead of Calum Chambers and Cedric Soares in the right-back position, while fellow new arrival Ben White has also found his feet at the heart of Arsenal’s back four.

The latter will likely be partnered by Gabriel Magalhaes on a first-choice basis between now and the end of the campaign, with Kieran Tierney reprising his role at left-back.

Sanches will likely feature as a deep-lying midfielder alongside Thomas Partey if he ends up sealing a move to Arsenal in the January transfer window.

The former Bayern Munich playmaker was deployed in a similar role for Lille last season as they pipped Paris Saint-Germain to the Ligue 1 title.

Albert Sambi Lokonga will be able to provide cover for both players but will need to work hard to justify a starting spot over either of the aforementioned duo.

Meanwhile, Emile Smith Rowe has been one of Arsenal’s shining lights this season and will continue to keep Martin Odegaard out of the side if he can maintain his impressive form.

It could soon be all-change in attack for the Gunners if Lang and Isak are both snapped up by Edu at the turn of the year.

The former would be pushing to start over Nicolas Pepe, who has struggled on a number of occasions since joining Arsenal in a club-record move back in 2019.

Meanwhile, Isak has already scored five goals in all competitions for Real Sociedad this season and has plenty of room for additional growth at just 22 years of age.

He could ultimately serve as a long-term replacement for Alexandre Lacazette, who is widely expected to call time on his Arsenal spell upon the expiry of his contract in the summer.