A jury in the US state of Georgia has delivered guilty verdicts to three men for the killing of Ahmaud Arbery, whose fatal shooting last year fuelled mass protests against racism and vigilantism in the United States.

The jury in the city of Brunswick, Georgia, on Wednesday found Travis McMichael, 35, guilty on all nine charges he faced, including malice murder, felony murder, false imprisonment and aggravated assault.

The three men – all of whom pleaded not guilty – were charged after chasing and fatally shooting Arbery in February 2020 as he jogged through the coastal community of Satilla Shores, just outside of Brunswick.

The 25-year-old’s killing became part of a larger reckoning on racial injustice in the US after graphic video of his death leaked online two months later and the Georgia Bureau of Investigation took over the case, quickly arresting the three men.

Before delivering their verdict on Wednesday, the jurors asked to re-watch video recorded by Bryan on his mobile phone of Travis McMichael firing his pump-action shotgun at close range into Arbery. That video became some of the most important evidence delivered during the trial.

The younger McMichael, the only defendant to take the witness stand, said he fired his shotgun at Arbery in self-defence.

The jury also asked to hear again the 911 call made by Greg McMichael moments before the shooting, in which he told the emergency operator that “there’s a Black male running down the street” and can be heard yelling at Arbery repeatedly to stop.

The shooting happened after the defendants jumped in their pick-up trucks and chased Arbery to detain him, they said, because they believed he might have been responsible for property crimes that had left the neighbourhood on edge.

No evidence emerged that Arbery ever stole anything on his frequent runs through Satilla Shores. He was killed with nothing in his pockets, not even a mobile phone or wallet.

The men face minimum sentences of life in prison. It is up to the judge to decide whether that comes with or without the possibility of parole. 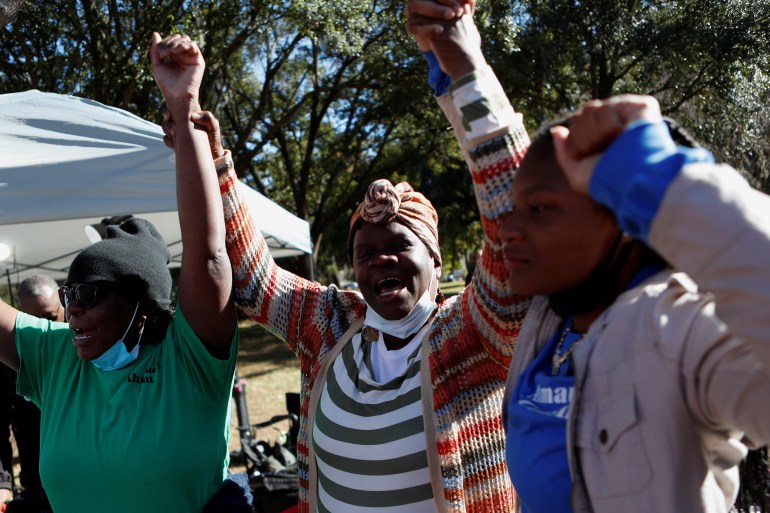 Al Jazeera’s Shihab Rattansi, reporting from outside the courtroom, pointed out that the jury reached its decision in less than two full days of deliberations.

He said the verdict brings a “mixture of relief and surprise and joy” to Arbery’s family and supporters, but stressed that the three men were only charged after the video of the killing emerged.

“As always, we have to remind ourselves that when Arbery was initially killed, and [when] the police arrived, they accepted the stories of these men,” Rattansi said.

“It was only when cellphone video showed up that things changed and charges were filed against these men. How many times will there no be cellphone footage? There is that mixture of relief and surprise and joy. But there is also that realism.”

In the courtroom on Wednesday, Arbery’s mother, Wanda Cooper-Jones, looked up as she appeared to mouth silent prayer as the judge prepared to read out the verdict. As the first guilty verdict was read aloud, she sobbed aloud: “Oh!”

Her head sunk into her chest as she wept, with Reverend Al Sharpton, a prominent US civil rights activist, gripping her hand. Arbery’s father, Marcus Arbery, leapt up and cheered. Sheriff’s deputies came over and told him he had to leave.

“It’s been a long time coming,” Marcus Arbery said, and left. Later, Arbery’s father was seen crying and hugging supporters outside the courtroom. “He didn’t do nothing,” the father said, “but run and dream.”

The verdict came just days after a separate jury in the state of Wisconsin acquitted Kyle Rittenhouse of all charges related to a deadly shooting of racial justice protesters last year in Kenosha. Rittenhouse, who claimed self-defence, killed two demonstrators and wounded a third.

Both trials have underscored divisions among Americans over guns, racism and vigilantism.

On this #Thanksgiving holiday,  I want you to look at your table and think about the empty seat at Wanda Cooper and Marcus Arbery’s tables, then really ask if there’s a reason that seat should be empty. Remember the Arbery family and so many others like them this holiday season pic.twitter.com/Ufk6TUw6Ti

Prior to the verdict, Superior Court Judge Timothy Walmsley had instructed the jury of 11 white men and women and one Black man in the law governing the case, including a now-defunct citizen’s arrest law at the heart of the defence.

Walmsley told jurors that someone can make a citizen’s arrest only if a crime has occurred “in his presence or within his immediate knowledge”.

President Joe Biden welcomed the jury’s decision on Wednesday, calling the killing of Arbery a “devastating reminder” of the need to push for racial justice.

“Nothing can bring Mr. Arbery back to his family and to his community, but the verdict ensures that those who committed this horrible crime will be punished,” Biden said in a statement. “While the guilty verdicts reflect our justice system doing its job, that alone is not enough. Instead, we must recommit ourselves to building a future of unity and shared strength, where no one fears violence because of the color of their skin.”

Benjamin Crump, a lawyer for Arbery’s father, also said in a statement: “Guilty. Guilty. Guilty. After nearly two years of pain, suffering, and wondering if Ahmaud’s killers would be held to account, the Arbery family finally has some justice.”

A jury believed the evidence of their eyes and saw the meanness in the killers’ hearts. May this verdict bring a small measure of peace to #AhmaudArbery’s family and loved ones. https://t.co/pGGQfIcUfX