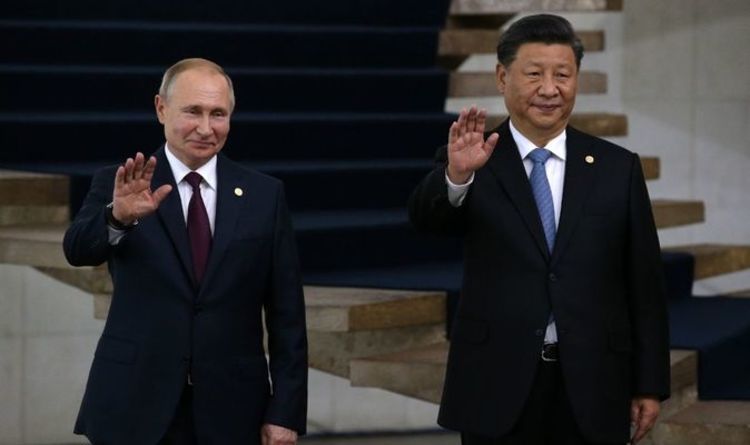 Amid the 20th anniversary of the two countries’ Treaty of Good-Neighborliness and Friendly Cooperation this year, Russia and China have officially introduced new plans for a united military strategy. In a video call between Chinese Defense Minister Wei Fenghe and Russian Defense Minister Sergei Shoigu on Tuesday, the military leaders have issued strong allegations against what they called American attempts to impose “disruption and sabotage of regional peace and stability.”

Prior to the conference, Senior Colonel Shi Yi, a spokesperson for the Chinese Defense Ministry released a statement blasting America for navigating its guided-missile destroyer USS Milius through the Taiwan Strait that separates the Chinese mainland from the self-ruling island.

Shi Yi said: “This action of the US side created security risks and undermined regional stability. The troops of the PLA Eastern Theater Command will take all measures necessary to resolutely counter all threats and provocations and safeguard China’s national sovereignty and territorial integrity.”

Tensions around the island have been mounting since President Xi Jinping vowed in 2019 to “reunify” Taiwan with the Chinese mainland, using force if necessary.

Washington broke off relations with the Taipei government in 1979 in favour of Beijing, but has maintained unofficial ties that have warmed in recent years as relations with Beijing soured.

To which Chinese Foreign Ministry spokesperson Zhao Lijian said: “The US warships have repeatedly flexed muscles, made provocations and stirred up trouble in the Taiwan Strait in the name of ‘freedom of navigation.’

“The US side should immediately correct its mistakes, stop making provocations, challenging the bottom line and playing with fire, and play a more constructive role in regional peace and stability.”

He said: “We note a significant intensification of the actions of American strategic bomber aviation near the borders of Russia. Over the past month, about 30 sorties were made to the borders of the Russian Federation, which is 2.5 times more than in the corresponding period last year.

“10 strategic bombers practiced the option of using nuclear weapons against Russia practically simultaneously from the Western and Eastern directions.”

Defense Minister Wei Fenghe praised his Russian counterpart for standing up against American threats and highlighted the strengthened collaboration to come: “Standing in the face of frantic US containment and pressure, China and Russia are united together like a great mountain.

“Our friendship is unbreakable. Together, we countered the hegemony of the US, and we oppose the fake democratic regime of the US, the fake multi-culturalism, as well as new forms of manifestation of the Cold War.

“Therefore, we’ve displayed our relations as being better than allies.”

The two countries will reportedly work on more joint drills together as well as patrols over the next 4 years.

The Russian leader has “gladly accepted the invitation” according to Chinese Foreign Ministry spokesperson Zhao Lijian.